Bright and cheerful Diarga loves playing soccer with other children in his village, but his twisted legs made it difficult to run or even walk. 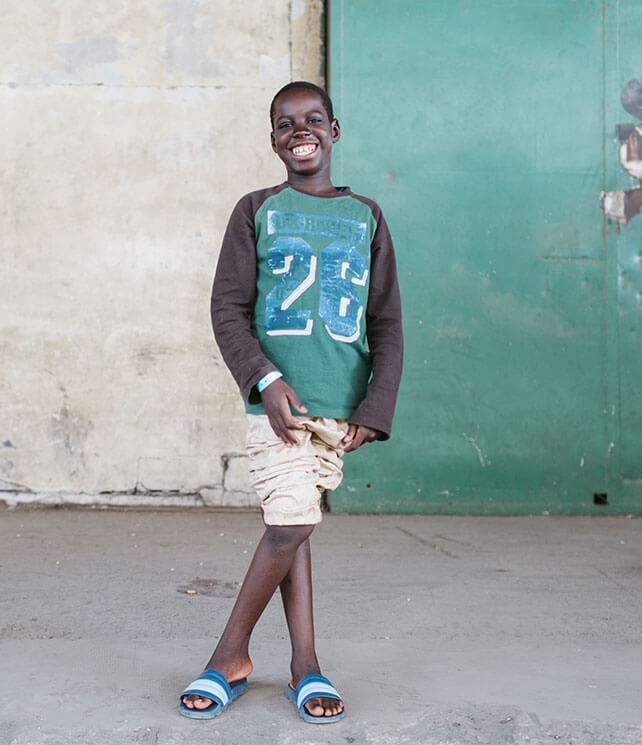 While his condition continually slowed him down, Diarga refused to let it keep him from his passion — soccer! Despite his clumsy gait, he continued to play a central position in games held in the village. When his disability threw him off balance, the other kids would laugh at him, but he would pick himself up with a smile and never complain.

While Diarga’s strong and resilient character and incredible sense of humor kept the boy in good spirits, his family worried about his future. His parents feared that as he grew up, his twisted limbs would cause him continued pain that could develop into arthritis.

Then, one day, Diarga’s teacher shared about a hospital ship coming to Dakar, Senegal. His parents were thrilled for the chance to find healing for their son but were unable to travel. Instead, his aunt, Seynabou, decided to go with him.

“God came to meet our prayers,” Seynabou said. “And to be a supportive family is important.”

From the very moment he arrived at the port, Diarga’s easy smile began winning the hearts of the healthcare volunteers. When asked where his joyful spirit came from, Diarga smiled broadly, saying, “It’s my nature to be happy! I rarely get sad.”

After arriving at the Africa Mercy, Diarga received surgery to help straighten his legs, and soon the young boy was recovering with the help of medical volunteers onboard the ship. A few days after his operation, he took his first wobbly steps, leaning heavily on a walker, his joyful smile firmly in place.

His aunt was thrilled, saying, “Other children will never laugh at him again. I’m so happy and proud of him.”

While his first steps were an exciting victory, a long process of healing and rehabilitation lay ahead. Seynabou and Diarga moved to the Mercy Ships Hospital Outpatient Extension (HOPE) Center, where they lived in community with many other Africa Mercy patients.

During his stay in the HOPE center, Diarga continued physical therapy sessions to strengthen his legs. The sessions were demanding, but he would always wear his smile and never complain. His gait and balance continued to improve, and finally, after three long but joyful months, he was ready to be discharged. It was time for him to leave his Mercy Ships family and return to his life back home in The Gambia!

“I’ve missed my family,” Diarga said. “But, I’m also looking forward to returning to school and to the fields with my family.”

Now healed, Diarga’s future looks brighter than ever. He is eager to see how his new legs will perform on the soccer field and even dreams of going professional one day.

Thanks to friends like you, Diarga received a life-changing surgery on the Africa Mercy.