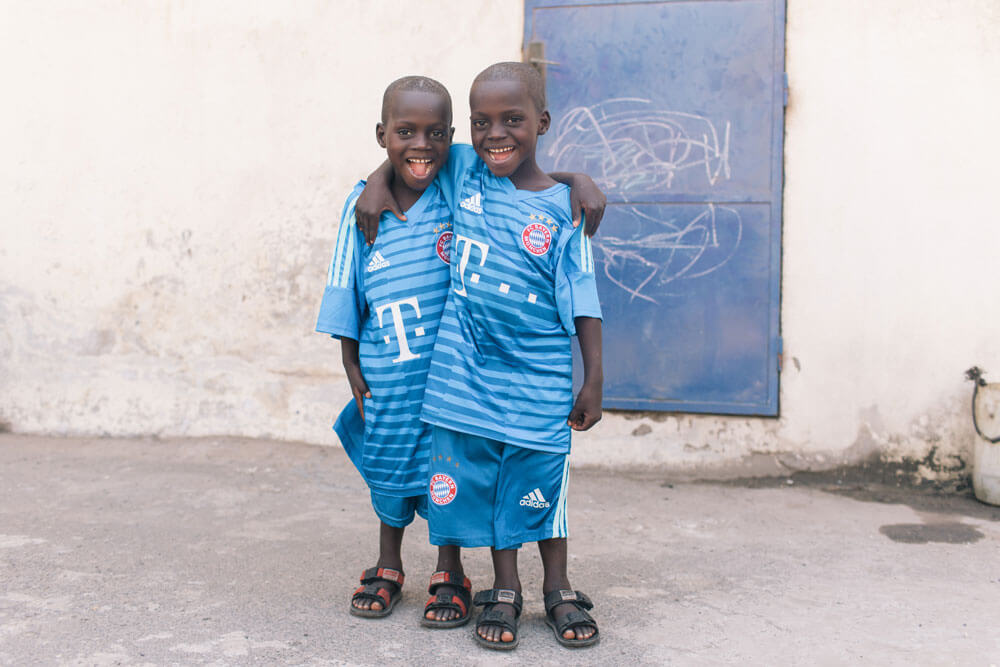 Thank you for joining us in bringing hope and healing this GivingTuesday! We can’t think of a better way to kick off the Christmas season than with this special day dedicated to bringing hope to those who need it most. Thanks to your generosity, even more children and adults will be able to find the healing that they so desperately need. THANK YOU!

The need for safe, reliable healthcare in West Africa is overwhelming. But the good news is that your support this GivingTuesday will help Mercy Ships bring hope and healing to even more people!

Thank you for partnering with us and bringing twice the hope to the many children and adults who have felt burdened and defined by their conditions for so long. Thank you.

These simple operations transform lives and change our patients’ futures forever — patients like Assane and Ousseynou.

Double the trouble, twice the joy

For twin brothers Assane and Ousseynou, hope was found on board one of our hospital ships. These 5-year-old brothers shared everything — including a rare condition that caused their legs to bend painfully outward at the knee.

“It was hard for us. We knew that the neighbors were laughing about the twins,” their mother, Awa, said. “But we could not hide Assane and Ousseynou away, so we all had to live with people treating them as inferior.”

Their parents worried that there was nothing that they could do to protect or heal their children, but then they heard about Mercy Ships. Not long after, the boys were brought onto the hospital ship known as the Africa Mercy, where they received surgery to correct their bent legs.

“When they came back to the ward after the surgery, and their legs were straight in their casts, I was so, so very happy,” she said.

During the weeks following the surgery, the twins quickly won over the hearts of the volunteer and day crew on the Africa Mercy while they worked on rehabilitation. Once their casts came off, the physical therapy sessions became a bit tougher. The goal was to improve their range of motion, balance, and strength. Eventually, the twins were moving faster and more confidently than they had been able to before.

“Since I gave birth to Assane and Ousseynou, I have never seen them run,” Awa said. “The surgeries created this opportunity. It is something that comes only once in a lifetime.”

We’ve seen many stories like Assane and Ousseynou since we started our mission in 1978. But none of them would be possible without the dedication of our compassionate friends who have stood with us to bring hope and healing to the world’s forgotten poor, people like you!