It was a sunny, relaxed afternoon in the village. The air was thick with heat as baby Maeva slept peacefully in her crib. The curtains were dancing in the breeze, and her family was resting in the shade outside their house. 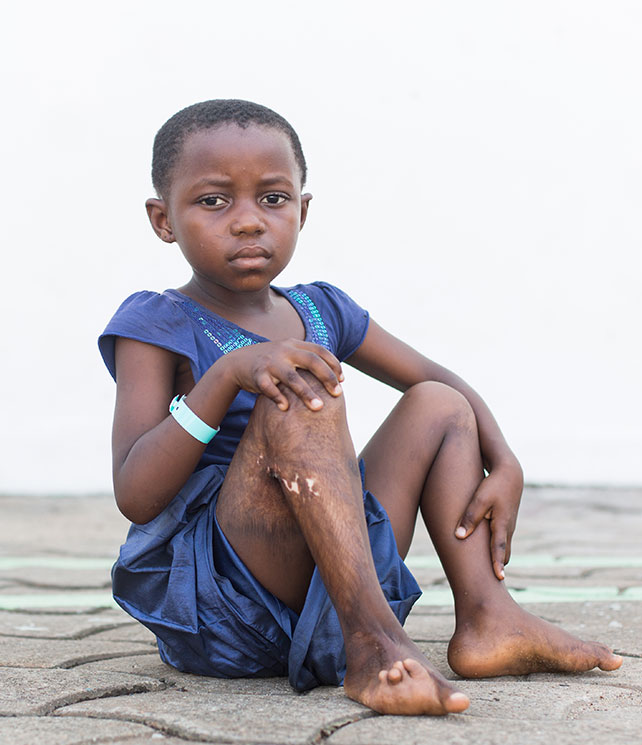 It was a sunny, relaxed afternoon in the village. The air was thick with heat as baby Maeva slept peacefully in her crib. The curtains were dancing in the breeze, and her family was resting in the shade outside their house.

Suddenly, they heard bone-chilling screams of pain coming from their newborn baby’s room.

Maeva’s 4-year-old brother had discovered some matches and was playing with them when the mosquito net covering his baby sister caught fire. Within minutes, the net was engulfed in flames, trapping Maeva and her tortured cries inside.

Her family and neighbors desperately threw palm leaves and sand on the infant to extinguish the flames. They thrashed the flames with their coats until they retrieved the screaming baby, who now had severe burns on her legs, foot, and hand. She was rushed to the local hospital, where her burns were treated. Her family was told that she would need surgery — surgery that they could not afford.

Reluctantly, Maeva’s family brought her home and tried to ease her pain themselves. But as little Maeva grew, the extent of her contracted skin meant she would likely never walk correctly or wear shoes, and she would need treatment for pain for the rest of her life. As the years went by, the other little girls laughed at Maeva while she limped home crying.

“Her only wish at 5 years old was to be able to wear pretty shoes like the other girls did,” recalled her grandmother, Benedict.

Benedict had saved money for years in order to give her grandchild the gift of surgery to ease her suffering, but that dream often seemed too far away.

“I was worried that she would grow up to be different, and that this would affect her future and chances in life. I was also concerned because every time Maeva had to walk far, she would experience pain.”

When Benedict heard about Mercy Ships, she jumped at the opportunity. From the day they arrived at the ship, Benedict promised Maeva she’d leave in a brand-new pair of shoes “just like the other girls.”

“I am going to buy her a pair of shoes to celebrate when she has finished her time here,” said Benedict, beaming with pride. Maeva began to daydream about the colors and styles of slippers and sandals that she would one day be able to wear.

And, after surgery and several weeks of rehabilitation on board the Africa Mercy, 5-year-old Maeva’s dreams became a reality! She was presented with her very own pair of shoes… and they fit!

Thanks to friends like you, Maeva received a life-changing surgery on the Africa Mercy.