A Dream of Safe Surgery

Emmanuel Essah was born and raised in Benin and studied as a telecommunications professional. But in the back of his mind, there was always another dream. He wanted to work in medicine.

In 2009, Emmanuel joined the Mercy Ships national crew when the Africa Mercy® docked in his home country of Benin. While this brought him closer to the medical field, he still had no training — so he served as a translator for the dental team. One day, they were having trouble with some equipment. A man from the ship arrived to help.

“He introduced himself as the biomedical engineer,” Emmanuel remembered.

Emmanuel learned that this man was responsible for installing, maintaining, and calibrating the ship’s medical equipment.

“That’s when it clicked in my mind,” Emmanuel said. “If I can’t study medicine, maybe I will be involved somehow in the medical field by supporting the medical staff. By making sure that the equipment works well and that the patients are taken care of.”

A Vision for Training 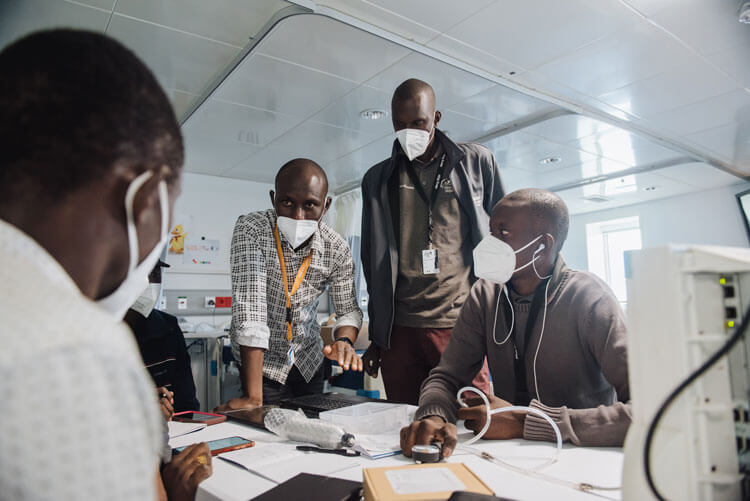 He went to Texas for training, where he learned about how faulty medical equipment harmed patients across the state.

He thought to himself, “If patients are this vulnerable … how many more lives have been affected in my country?”

From that moment, Emmanuel knew he wasn’t just going to become a biomedical technician himself. He was going to help train others.

“That’s when I had it in my head that whenever I am given the opportunity, I will be sharing my knowledge with my fellow Africans,” he said.

Emmanuel returned to the ship and began to work in the Africa Mercy hospital, building up his professional experience. During that time, he organized his first biomedical technician training in Benin.

According to a World Health Organization study, 85% of surveyed hospitals in Africa report difficulty finding qualified medical technicians to repair and service medical equipment. Emmanuel’s mission had the potential to change these numbers in Benin and beyond.

In 2020 and 2022, in partnership with Optimum Biomedical, Emmanuel helped facilitate training for 37 local biomedical technicians in Senegal. Now that the training is complete, Emmanuel will follow up with every single one of them.

“We go to them in their hospital setting to spend time with them, to see how we can best support them,” he said. “To help them put into practice the things they have learned in the training.”

Over the past two years, Emmanuel’s team has also trained and mentored technicians in Guinea and Liberia.

The continent of Africa is at a turning point as nations work together to strengthen surgical, obstetric, and anesthetic systems. Several leaders recently committed to the Dakar Declaration, working toward key improvements by 2030.

“I think it is a very exciting time because as we all strive to work toward safe surgery, biomedical training plays a big role in that ecosystem,” Emmanuel said.

He went on to share that while a hospital may have excellent surgeons, anesthesiologists, and clinical staff when the medical equipment is unreliable, the patients may not be safe.

Doctors and surgeons rely on their equipment to make a diagnosis. If that diagnosis is wrong, the patient could be treated incorrectly — and could be harmed.

“We need local biomedical technicians to be well trained so that they are professional, they know how to take care of medical equipment,” he said. “Then we can say the patient can receive safe surgery.”

Emmanuel believes training biomedical technicians is key to the overall goal of improving surgical and anesthetic systems in Africa.

“That’s what medical capacity building is all about, to build the capacity, to build the confidence in these people who once maybe did not have enough knowledge or skills to support their healthcare,” he said.

The momentum in Emmanuel’s home country of Benin — and across the continent — is clear.

“Leaders are working. They’re working hard,” he said. “At the same time, they also need partners like Mercy Ships to come in and support them and help them build the capacity of their staff.”

Transferring knowledge, Emmanuel said, is key to the sustainability of this work.

“We want the local biomedical technicians to be able to do what we can do,” he said. “We want to share the knowledge and the skills with them so that even when the ship leaves, they are still able to support their healthcare system.”