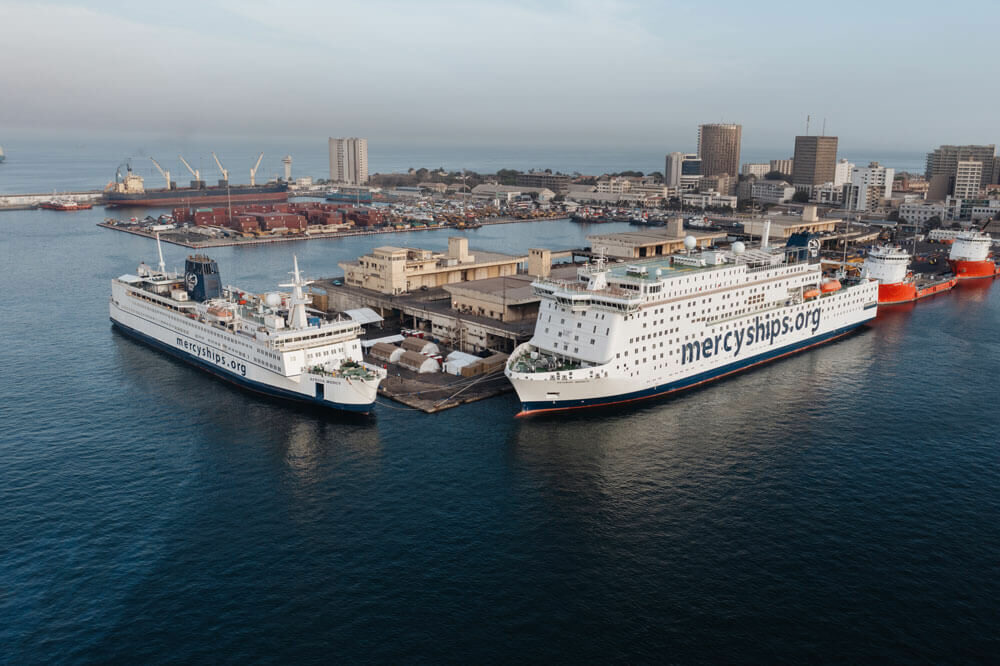 New Hope for the Future of Surgery

On a Friday afternoon in Senegal, a soft breeze streamed through, nipping at the faces of Mercy Ships crewmembers excitedly looking out into the ocean from the highest deck of the Africa Mercy hospital ship. At the same moment, people across the world watched from home, filled with equal anticipation.

“There, I can see it!” 8-year-old Amayah, a student from Canada in the ship’s Academy, squealed in delight. Over the horizon, the Global Mercy glided through the mirror-like water. From a distance, she was deceptively small. But as she inched closer, her full bulk was revealed.

As the ship met bow to bow with the Africa Mercy, the excitement swelled. After all, the impact of an expanded two-ship fleet will ripple through lives across Africa, bringing more safe surgeries to the patients who need them, and increased training to empower local healthcare professionals.

This moment would have been breathtaking enough on its own. But the Global Mercy’s arrival in Dakar, Senegal, was just one of several history-making events. All in the span of a few weeks. All with a common theme: Renewed hope for the future of surgery in Africa.

Several months ago, a groundbreaking research effort began. Scientific experts across Africa and the entire globe gathered data from more than 600 district hospitals to develop a baseline assessment of the continent’s surgical, obstetric, and anesthetic systems.

At an unprecedented International Symposium in Dakar, from May 4-6, those scientists gathered to share their knowledge. Then, heads of state and other ministerial representatives from 29 African nations joined them to go over the results — and to make a roadmap for the future. Thus, the Dakar Declaration was born: a strategic plan to make key improvements to those local surgical, obstetric, and anesthetic systems by 2030.

The Global Mercy Begins her Life of Service

The Global Mercy’s arrival in Dakar came just weeks after that scientific summit. Docked in Africa for the first time, the newest, purpose-built Mercy Ship could finally be officially inaugurated. The long-awaited ceremony was delayed until this special moment when the ship could be dedicated on the continent she’s destined to serve.

The ceremony, on May 30, was attended by His Excellency Macky Sall, President of Senegal, along with other African presidents, ministers of health, country delegates, and Mercy Ships partners. President Sall took the floor to welcome the Global Mercy, honoring the 30-year partnership between Mercy Ships and Africa, saying:

“We express our gratitude to them in promoting safer surgery in Africa, and we give them all the recognition that is due them since 1990.”

When asked by the Senegalese press where the Global Mercy came from, Mercy Ships VP of Global Branding, Jitze Kramer, answered:

“This vessel came from a dream, a dream from our founder Don Stephens — and today this dream is a reality here in Dakar, Senegal.”

Later, in a more intimate Celebration of Hope, the Mercy Ships community gathered for a torch ceremony, passing a flame from the Africa Mercy to the Global Mercy. The rite of passage was performed just as it had been 15 years ago, when the organization’s first ship, the Anastasis, passed its flame to the Africa Mercy. This time, though, the flame wasn’t transferred. It was shared.

“This is history in the making,” said Nathan Claus, Director of Clinical Services for both ships. The difference in this new season, he said, will be in the scope of the impact.

“More lives and communities transformed, but also more opportunities to stand alongside our partners here in Africa and train and mentor with the healthcare workers here, and really strengthen surgical systems here.”

The arrival of the Global Mercy signifies a new era for the partnership between Mercy Ships and Africa. But she’s just one piece of a larger movement toward safer surgery across the continent.

Drawing on the data gathered and analyzed at the International Symposium, representatives from several African nations met on board the Global Mercy to adopt the Dakar Declaration.

“This historic document is the roadmap for the future of accelerating safe surgical, obstetric, and anesthetic care in Africa in the years to come,” said Gert van de Weerdhof.

The document, a commitment to key improvements in surgical, obstetric, and anesthetic systems across the continent by 2030 was crafted based on input from 29 African nations.

As His Excellency Comorian President Azali Assoumani said, “The hour is no longer for speeches but for action.”

In front of the gathered leaders, President Sall pledged to bring the Dakar Declaration to the Conference of African Heads of State and Government. “Without health, there is no development in Africa,” he said.

The Future of Partnership

As Founder Don Stephens and CEO Gert van de Weerdhof stood among the continent’s leaders, witnessing the commitment to the Dakar Declaration, each felt the significance of the moment.

“I see the group of great leaders and changemakers around me, and I feel the weight of the impact in this room today,” said Gert.

Don shared, “In 30 years since we were first invited to Togo, never in our imagination could we have thought that we would be here in such a meeting as this.”

On the day the Global Mercy sailed in, she stood as a symbol of this commitment. And as the Africa Mercy crew celebrated, a patient named Fatou was also watching. The 60-year-old Senegalese woman had suffered from a large facial tumor until a Mercy Ships surgery removed it.

“It’s a blessing to us Senegalese people, I can’t even express how much joy this gives us,” Fatou said. “Because more people who are sick like me can get help.”