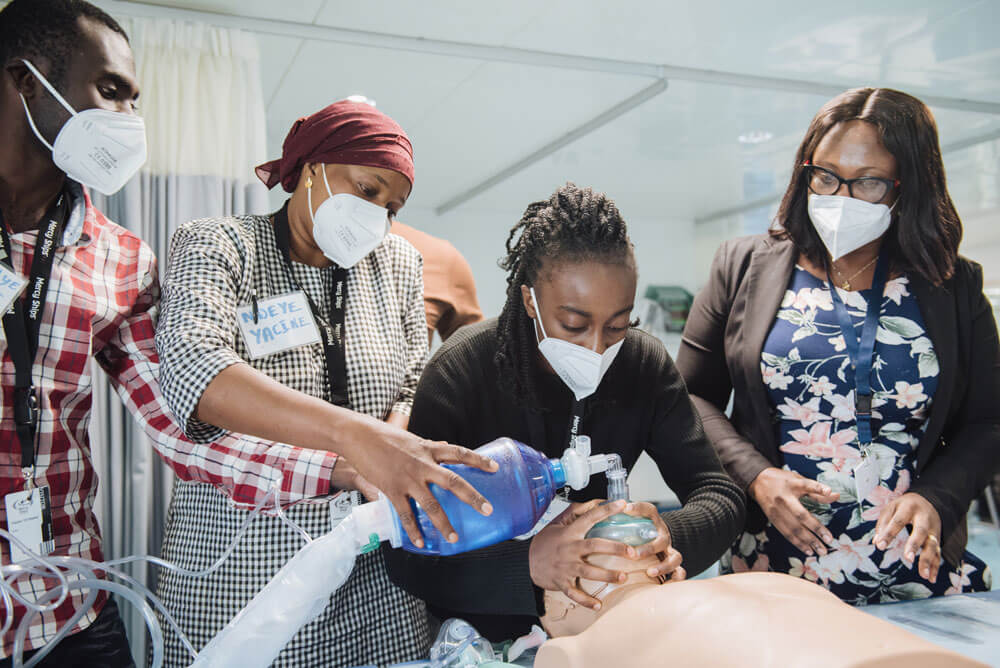 Dr. Ngouatna is an anesthesiologist, and he works in critical care and emergency medicine. Already an experienced physician, he is based at Yaoundé Emergency Center, and serves as a lecturer at the University of Yaoundé.

When the Africa Mercy traveled to his home country to offer free surgical care and training, Dr. Ngouatna knew it was a chance to learn new skills. He took two courses as part of the Mercy Ships Medical Capacity Building program: one on safe pediatrics and another on primary trauma care. But he wasn’t satisfied with just learning — he wanted to share his knowledge, too.

“At the end of these courses, I was trained as an instructor,” he said.

He continued to work with Mercy Ships while the Africa Mercy was docked in Cameroon, helping to teach several courses alongside his new colleagues, with support from the Primary Trauma Care Foundation.

When the ship left for Guinea in 2018, Dr. Ngouatna wanted to continue his work. He went to Cameroon’s Ministry of Health and proposed a partnership.

The Ministry of Health agreed to team up with Dr. Ngouatna, and they’ve been working together to facilitate trainings ever since.

Primary trauma care is especially vital in Cameroon, where the World Health Organization has reported that injuries make up as much of the country’s burden of disease as malaria. One hospital study showed nearly 50% of emergency department visits were injured patients.

In preparation for the Africa Cup of Nations football championship in January 2022, Dr. Ngouatna and his partners at the Ministry of Health prepared local doctors and nurses to handle the large event.

Tragically, this training turned out to be vital. A stampede outside the stadium during the game killed several people and left dozens more injured. Dr. Ngouatna believes the training that took place ahead of time directly impacted the quality of the medical response.

“The training helped people during this competition,” he said. “The medical staff who were around the stadium, who have been trained, managed this incident with many abilities.”

The core goal of medical capacity building is to support and empower local physicians and medical staff, so they can in turn strengthen their own healthcare systems.

Joan Kotze, director of the Mercy Ships Medical Capacity Building program, said she’s been “blown away” by Dr. Ngouatna’s impact in his country over just a few years.

“He’s getting known in the region as one of the foremost primary trauma care trainers, and he’s just really passionate about teaching,” she said.

When colleagues receive training in a new area, Dr. Ngouatna loves to watch the knowledge sink in.

“Sometimes you see the eyes, they just open,” he said. “They like it, because there’s a new way to do things, a new approach to take care of patients.”

Dr. Ngouatna works mostly with the Ministry of Health, but he has also been called upon to offer his skills as a trainer with Doctors Without Borders.

“What we hope is that if we have enough people working in hospitals, in emergency departments, in hospital services, if we have many people trained in emergency care, in primary trauma care … we will do things better and this will improve the mortality, the morbidity of our population,” he said.

This training is especially important in rural regions of Cameroon, where doctors may not have access to new techniques and technology.

“We have too many cities or villages where sometimes doctors are not up to date in medicine,” he said.

Dr. Ngouatna hopes to reach more of those areas in the future.

“When they call me, I will go,” he said. “Because my objective is to teach as many as possible.”

Sometimes, Dr. Ngouatna runs into former students who thank him for what he’s taught them.

“You feel like, ‘Wow, I did something good,’” he said. “Maybe tomorrow, my parents or my grandparents will be healed, will be saved by a former student of mine.”