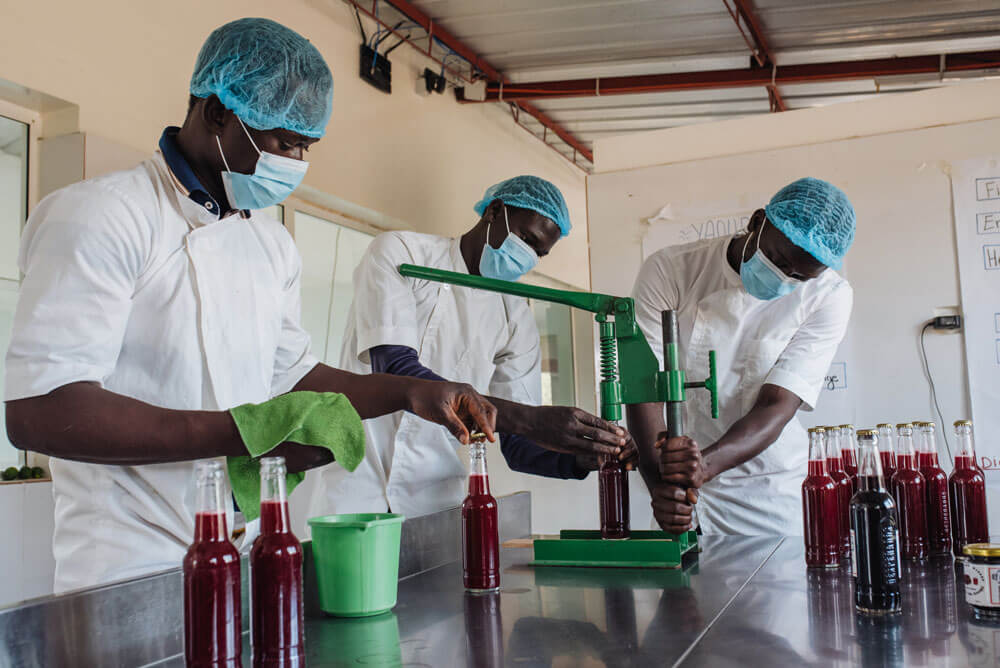 But this king didn’t act too high and mighty.

Instead, Baba Ndiaye turned his attention to helping others in the class.

“He is a very dedicated participant, and always strives to be a good example among the team,” said Eliphaz Essah, who manages the Mercy Ships Food for Life program.

Food for Life has trained more than 800 people in nine countries since 2007. The 22-week course covers sustainable agriculture and food processing, helping community members become independent growers and distributors of healthy, nutritional products. Methods taught in class are tied closely to preventing malnutrition and promoting health, a particularly important focus in sub-Saharan Africa, where an estimated one in four people remain undernourished.

Through the course, students are also trained to teach others, ensuring that their knowledge continues to spread.

Baba graduated from the program in 2022 as a star student. But just a few years ago, he couldn’t have dreamed of becoming one of the top producers in his class. In fact, he couldn’t dream of doing any farming at all.

The day that would darken Baba’s future started just like any other. He was picking up the lid of a pot in his home in Senegal. Suddenly, he realized his hands and arms had caught fire. Baba’s neighbors came to help, putting out the fire and bringing him to the hospital. But the burns left him unable to use one of his arms.

Coming from a family of peanut farmers, Baba lived in a world of manual labor. But after his accident, he didn’t know how he would work or take care of himself, let alone a future family.

Then in 2019, when the Africa Mercy® sailed to Dakar, Baba received free reconstructive plastic surgery from Mercy Ships. After the operation, he regained the use of his arm and hand.

Now, he could resume his farming – but he wasn’t satisfied with just two hands to work the fields. He wanted new skills to match.

Baba’s friends told him about the Mercy Ships Food for Life program, and he decided to sign up.

He wasn’t just motivated to become a better farmer for himself. He wanted to help his community in Kaffrine, where many residents produce groundnuts. In fact, the crop is so ingrained into the area that it’s known as Senegal’s Peanut Basin.

“We produce a lot in our community, and we sell what we produce at very low prices,” he said. “And in return, we buy these processed products at high prices.”

Baba wanted to learn how to help his family and friends improve this equation. Then in October 2021, he got a call from a Food for Life coordinator officially inviting him to join the program.

At the training site, he learned everything from sustainable development to poultry and rabbit farming, to the impacts of climate change.

“Baba did not learn only how to grow crops using natural resources, but also how to process foods,” said Eliphaz. “Today, he is capable of producing ginger syrup, yogurt, and infant-feeding porridge to alleviate severe malnutrition issues in his community.”

Now, Baba wants to start his own food production business. He also wants to show his neighbors how to produce vegetables to sell at the local market. How to process local products like ginger, bissap, and milk. How to raise poultry, feeding them only organic food.

He wants to teach his community how to grow the “organic way.”

‘Hope is Restored for Baba’

Baba knows none of this would have been possible if he hadn’t had the courage to take those first steps toward healing.

“I never thought I would have this opportunity to have my operation and then take training in agroecology,” Baba said. “Thank you very much to Mercy Ships for the change they have made in my life.”

Baba’s story of healing, and his hard work toward a new future, continue to be an inspiration for the people around him.

“Many of his classmates were touched by his testimony,” said Eliphaz. “He became a source of motivation for the rest of the class.”

It’s not only Baba and his fellow students whose lives have been changed. Just like many others, Baba headed home to empower his friends, family, and neighbors.

As Eliphaz said, “Hope is restored for Baba” — and for his whole community.

Learn more about the Mercy Ships Medical Capacity Building program, investing in training that empowers people like Baba to lift up their communities.