Even experienced nurses had never seen a case quite like 12-year-old Ulrich’s. He was born with muscles in his legs that didn’t develop at the same rate as his bones, leaving his legs bent drastically backward. 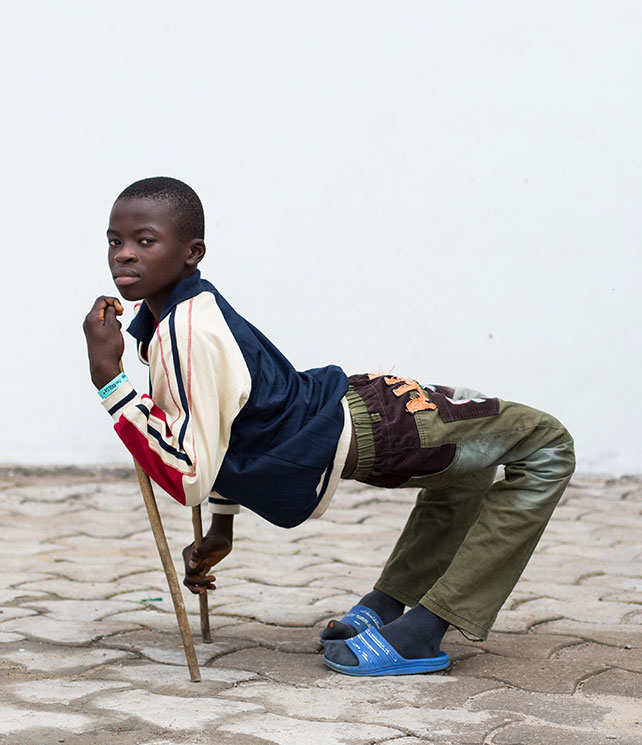 Even experienced nurses on board the Africa Mercy had never seen a case quite like 12-year-old Ulrich’s. He was born with muscles in his legs that didn’t develop at the same rate as his bones, leaving his legs bent drastically backward.

His mother was desperate to find Ulrich the surgery he needed, but the cost of surgery and the severity of his condition meant her hopes were soon crushed.

Despite constant stares and ridicule, Ulrich learned to adapt to his condition. He learned to walk with sticks made from sturdy branches, but experienced pain in his hands and joints from supporting his body weight all the time.“

I was worried that if I was feeling such pain now, it was only going to get worse as I got older,” he said.

It broke his heart that it was increasingly difficult for him to help his mother around the house by collecting firewood and fetching water.

“I was scared to grow up like that. I didn’t want this to be all my life was ever going to be.”

The day Ulrich arrived on the Africa Mercy for his free surgery, volunteer surgeon, Dr. Frank Haydon, was shocked.

“I’d never seen anything quite like it,” Dr. Haydon said. “Just when I think I’ve seen the worst case in my career, I meet the next Ulrich and it keeps me going.”

After several complex surgeries, Ulrich woke up to two newly straightened legs in casts. During his first attempt to stand, Ulrich reached up to see if he could touch the ceiling.

“When I would walk in the street before, people would stare at me. They thought I was just a handicapped person, and they treated me differently. Now, they will look again,” smiled Ulrich.

When his time on the Africa Mercy came to a close, Ulrich offered Dr. Haydon a gift — his old walking sticks. Ulrich knew he wouldn’t need them anymore now that he could walk correctly.

Now standing tall, Ulrich is excited to look his future in the eye and work toward his dream of getting an education!

Thanks to friends like you, Ulrich received a life-changing surgery on board the Africa Mercy.